While only six years old, Lightpost Winery has decades of experience—and talent— behind it.

From the first vintage, awards began consistently rolling in. Proprietor Sofia Fedotova and Winemaker Christian Roguenant were thrilled to be awarded Wine of the Year at the 2022 Monterey Wine Competition for their 2019 Lightpost Winery Cabernet Sauvignon Reserve, made from Paso Robles fruit.

It scored 97 points and was awarded a Platinum medal. In addition, Lightpost had eight additional Platinum- and Gold-winning wines, as well as four that scored Silver.

“We are very honored to have received this award and to be recognized by this prestigious competition that features many wonderful wines and wineries,” Fedotova said. “It is a great acknowledgment of our hard-working team and our efforts to create some outstanding wines that people enjoy. We are looking forward to a bright future for Lightpost Winery and many more amazing wines to come.”

Visitors can find Lightpost in Morgan Hill, in a small industrial park off Highway 101 at 900 Lightpost Way. Fun fact: the tasting room and winery occupy the former offices and warehouse space of one very famous artist, Thomas Kincade.

For Roguenant, achieving an honor like this is a gratifying affirmation of his lifelong success in the wine business. Arriving in the U.S. from France with a little English and even fewer dollars, he stepped off a bus to make his first purchase of snack foods at a convenience store. When he went to pay for the Coca-Cola, the checker asked, “Paper or plastic?” He thought they were asking whether he was paying by credit card or with paper money.

Fast forward 40 years and he has had the chance to pay for plenty of experiences with both, many times over. But one thing has always guided him, and that is making the best possible wine out of carefully farmed grapes, because that’s where it all starts.

Roguenant began his U.S. career at Champagne Deutz in Arroyo Grande, which was a partnership between a wealthy French businessman and Beringer USA. He was with the company from 1986 to 1997.

“I loved California and the opportunity,” Roguenant said. “The Frenchman from Versailles who owned the land and the winery building kept charging more and more money for the grapes, which caused Beringer to become pissed off.”

The partnership dissolved in 1993, leaving him president of the company, which was renamed Laetitia, after the French owner’s daughter. Roguenant says that Roederer actually acquired the Deutz name and wanted to buy the facility but the price was too high, which is why they ended up going to Philo, in the Anderson Valley.

Eventually, the French owner, whose father had made millions importing coffee beans from the Ivory Coast, wanted to sell the facility and it was time for Roguenant to move on. Although he had job offers from Opus One, he was intrigued by the opportunity presented by the Niven family to build a dream winery.

“I knew Tim and Michael Mondavi, but they were only making one wine at the time, which I thought was too boring,” Roguenant said. “The Niven’s gave me $4 million to design and build a winery. I was there for 20 years and then sold the business, after which I took time off and eventually met Sofia.”

He actually wasn’t loafing around in the meanwhile, though, instead keeping busy with winery projects in Australia and in the Loire, where he was making sparkling wine from Chenin Blanc.

While Roguenant himself loves Chardonnay and Pinot Noir, Fedotova enjoys big bold reds: hence the Cabernet Sauvignons from Paso Robles vineyards like Onyx in Templeton and Old Oak in the Willow Creek district.

Having been in the area for 37 years, Roguenant knows the vineyards and the people who farm them.

“Old Oak is on a slope and faces east and is 40 years old, from old clonal material, whereas Onyx is a new generation of planting, in a flat area with more sandy soil,” he said.

He also gets some grapes from the Derby Vineyard in Paso.

The 2019 Rion Reserve Cab (Gold, 93 points) also hails primarily from the Zayante Vineyard, with a tiny bit of Petit Verdot coming from Onyx. Rion is her younger son Teo’s middle name and means “Little King.” The 2019 Alexander Reserve, Paso Robles, (Gold, 91 points), is Cabernet, made of 85% Old Oak with 15% Petit Verdot from Onyx Vineyard. Alexander is a tribute to Fedotova’s father’s name, which means, “Defender of the People.”

Also from the Santa Cruz Mountains comes two of their Pinot Noirs, one from the Ferrari Vineyard and one from Saveria Vineyard. The 2019 vintage of the latter just scored 94 points from Wine Enthusiast. They scored Silver for their 2020 Spanish Springs Pinot Noir from SLO, and Gold for their 2020 Winemakers Select Pinot Noir, which contains a bit of Edna Valley fruit from a vineyard that was subsequently torn out, to complement the Spanish Springs.

Roguenant says the harvest of 2020, with the fires and the relentless scorching heat was the worst thing he’d ever witnessed from a grape-growing perspective.

One thing they did make more of in 2020 was sparkling wine.

“We picked the second week of August before the heat,” Roguenant said. “It turned out to be very good sparkling, even though it wasn’t a good vintage overall.”

They made three sparklings in 2020, including a sparkling rosé from Spanish Springs, a Blanc de Blancs from Spanish Springs and a Brut from 50% Chardonnay and 50% Pinot Noir from the Edna Valley vineyard that no longer exists. These sparklers, for which the base wine is made at Tooth & Nail in Paso Robles, will be released in the fall of this year.

A friend of Roguenant, who was a winemaker for Schramsberg, has a special bottling truck for handling sparkling wine, which is based in Napa. He brings the truck to Paso to do the bottling, after which the wine is shipped to Lightpost in Morgan Hill. There, it is aged and riddled.

Yes, that’s a lot of work: work that most wineries are happy to hand off to a larger sparkling house to handle. But, says Roguenant, “If you want to do a good sparkling, you have to do it yourself. I learned this in France.”

This is some well-traveled sparkling, not unlike its prodigious maker. 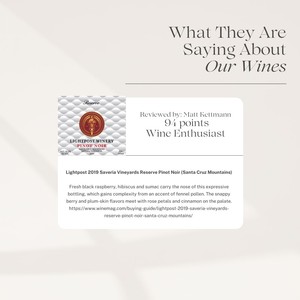 Fresh black raspberry, hibiscus and sumac carry the nose of this expressive bottling, which gains complexity from an accent of fennel pollen. The snappy berry and plum-skin flavors meet with rose petals and cinnamon on the palate.

What could be better than a great Pinot Noir? How about four of them? Hailing from as far away as San Luis Obispo and Russian River, and as near as the Santa Cruz Mountains, these wines really speak of place, and of winemaker Christian Roguenant’s eagerness to make them a snapshot of their vineyard birthplaces. I sat down with Christian and owner Sofia Fedotova to taste the latest Lightpost Winery Pinots, all of which won medals at the recent SF Chronicle Competition. The 2018 Russian River Pinot (Gold), Clone 2A and 667 from a vineyard in Guerneville, shows ripe berry, medium intensity, baking spice and soft cherry cola notes, making it an easy charmer. Heading south, the 2018 San Luis Obispo Pinot (Gold), also Clone 2A and 667, ups the ante with abundant earth, leather and savory aromas, and a wonderful structure, layered with dark cherry and chewy tannins, adding great length. The 2018 Spanish Springs Vineyard (Gold), hails from a 50-acre vineyard near Pismo Beach, and is made of 100 percent Swan clone, one of Christian’s favorites. This is a stunning red-headed beauty, exhibiting leather, incense, red cherry and cranberry, all wrapped in svelte tannin. Of the lot, the one with the most age-worthy horsepower is the head-turning 2018 Santa Cruz Mountains Pinot (Silver) from the dry-farmed Ferrari Vineyard, filled with forest floor, everlasting spice and impressive structure. There’s sure a lot of Noir to be found at Lightpost. https://southvalley.com/tasting-travel-at-lightpost

Congratulations to our Winemakers!

It’s always exciting when a local winery wins big in a local competition, and winning big this year in the San Francisco Chronicle Wine Competition was Lightpost Winery out of Morgan Hill for its 2018 Reserve Cabernet from Paso Robles, which tied with a Runquist syrah to win Best Red of Show.

Made by consulting winemaker Christian Roguenant, this was classic cabernet, with a whiff of ripe blackberries and rum balls, and flavors of chocolate-covered cherries and cassis, finishing with bold, yet supple, plush tannins.

I took these tasting notes as a judge in the competition, which this year was moved from January to the first week in March.

Another Lightpost wine, the outstanding 2019 Ferrari Vineyards pinot noir, was a Best of Class winner. It stood out for its mind-blowing aromatics of strawberry rhubarb pie, cedar and forest floor and its sensational acid core.

The week prior, another Lightpost cabernet, the 2019 “Sevastian” from the Santa Cruz Mountains, was in the sweepstakes round at the East Meets West Competition, garnering lots of support and attention from the judges for its tobacco, black pepper and fine leather aromas, and savory-sweet flavors of red cherry, pomegranate, tarragon and Hatch chile compote.

Hello everyone, I want to introduce to you our 2018 Albariño.

Albariño is a white wine grape grown in the Northwest part of Spain called Galicia. Albariño is the Indo-European word for the grape, whereas In Portugal it is called Alvarinho or Cainho Branco. This grape was often blended with Godello, Caiño, Loureiro, Arinto, or Treixadura up until 1985. Albariño began to be commonly made into a varietal wine in 1986 after the Rias Baixas DO was established. The AVAs in California that grow Albariño are: Santa Ynez Valley, Clarksburg, Napa, Edna Valley and Los Carneros.

We harvest our Albariño from Jespersen Ranch and Morro View Vineyards:

Morro View Vineyards – This vineyard is also in the Edna Valley AVA, so its climate is similar to the one of Jespersen Ranch. This vineyard has steep slopes, promoting air drainage which is important for protecting against spring frosts.

Tasting notes of our 2018 Albariño:

It has a medium straw gold color, with distinctive aromas of lemon, apple and banana. You may also discover some hints of rose petal in the nose.  It has an elegant texture with almost briny minerality, with fresh flavors on the palate comprising of Asian pear, green apple, and citrus.

Please come enjoy our 2018 Albariño at our tasting room!

We are excited to plant our Morgan Hill Estate Vineyard!

Sofia checking the progress of the vineyard. 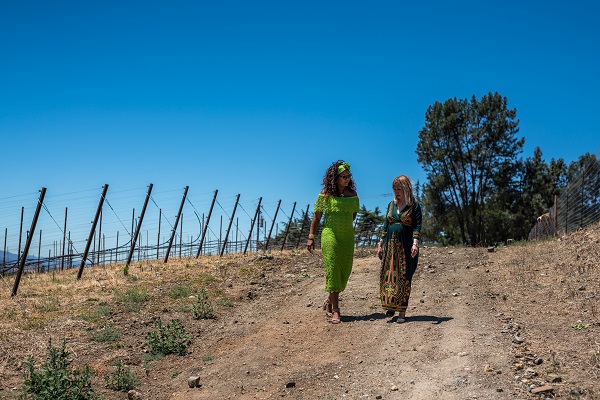